You are at:Home»Health & Wellness»The Extended Effects of Stealing We Deal With

This morning I woke up to the usual regimen… baby crying… time for the bottle! I fed my son (who is 11 1/2 weeks old) while my wife slept in. Currently, he sleeps in a bassinet and hasn’t graduated to his crib yet. That means half his crib is filled with stuffed animals from friends, family members, showers etc.

After he eats, I change him, kiss him, tell him daddy loves him etc and then the funny part comes… My wife bought him to wind up mobile for his crib and we lay him in there and wind it up and he LOVES it! His feet kick, he smiles (almost giggles) and his arms go wild! While he was enjoying his mobile, and also knowing that his graduation to his crib is coming this week, I felt I should go through some of the toys piled in it.

I ran across a Care Bear still in the box. When you push his tummy he giggles and says, “That tickles!” Push it again and he says, “I Love you…” very cute… I figured I better open it up and let him squeeze it.. after all, it was a gift to him! So I opened the box and the Care Bear slid out ever so swiftly… NOT. What I saw amazed me beyond belief. This little 10″ bear was wired into the box using 5 (yes FIVE) steel wires and black plastic panels… on top of that, the wires were bent over and covered with some sort of clear packaging tape.

As I stood there struggling with the “harnesses” I became a little angry at the company… then as I thought more, that anger turned toward thieves. After all, thieves are what drove the company to do this! I pictured some idiot who could afford to buy the “less than $10 bear” stuffing it into his/her shirt and then getting to their car and laughing. Next, they would throw it in their back window and run off to tell their friends… this was the reason why I was standing there struggling with security measures that would impress fort Knox! This was also why this bear most likely cost $1-$2 more for whoever purchased it…

My speed picked up as the steam starting rolling out of my ears, knowing my son was waiting for me to place the bear into his arms (not really… he was too worried about his mobile), but the thought of him waiting made me steam a bit more.. and for some reason I kind of liked it that way this morning. Just one of those days! 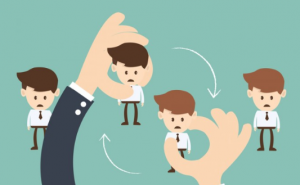 Then out of nowhere, my thoughts started changing. As I finally freed the bear from the wire cable’s clutches (I was just short of running to the garage for bolt cutters by the way) I began thinking about the other side of the coin. I thought about the people who really couldn’t afford to buy this bear for their kids. Now I am NOT condoning stealing in any way shape or form, so please don’t feel I am.

As I handed the bear to my son, I wondered how many kids were filled with joy when their parents (who stole it) handed them this very same bear… after all, is it the kid’s fault it was stolen? So instead of being angry at the thief, I (for a short while) felt happiness for the children. For that short time, I didn’t mind dealing with the cables.